You are here: Blog

The International Conference for Arts in Health is usually held every four years in Bristol, organised by Arts & Health South West (AHSW). The reach and influence of this English regional body has been extended well-beyond its remit under the energetic and ambitious directorship of Alex Coulter (also Secretary of The All Party Parliamentary Group for Arts, Health and Well-being). In light of the pandemic, the decision was made to go ahead with the three day conference online, with a programme encompassing no less than 200 submissions from 20 countries. The event’s title was also adapted to reflect the new descriptors set in play though the APPG’s Creative Health report, themed this year on the topics of ‘inequality, power, sustainability’.

Would a conference this mammoth, this blogger wondered, present a marathon to test human powers of sustained concentration? Differently textured presentations were offered to delegates to modulate the days - including live music, interactive singing workshops, as well as the usual panel and talking-head formats. Slung across time zones, the plethora of choice meant you had to curate your own choices, with catch-up recordings also made available in the days afterwards. (So this blog reflects one path and one effort alone!)

The first day was dedicated to the theme of ‘inequality in a global context’. New Zealand’s minister for the arts and social development (perhaps the next best thing to Jacinda Arden) was represented by Carmel Sepuloni. She gave a detailed account of how NZ was intending to ‘build back better’, putting in place an integrated cultural recovery as it continued to impose ‘closed borders’. Fellow key note, Professor Pascale Allotey (Director of the UN University Institute of Global Health) gave a more critical account of the benefit of ‘reverse engineering’ arts inclusion. Instead, she explored the deep-rooted nature of inequality as codified through culture itself.

Allotey further raised shortcomings of biomedical approaches that ‘force us to think a certain way’; which can only ‘address problems in isolation’ before being ‘rolled-out’ at a larger scale after trial. Focussing on the power of narrative and storytelling, she urged we ‘draw on art forms that throw into doubt who we are, how we engage with one another and how we engage with the planet’. Such a vision of Arts in Health would ‘require us to commit to shared values’ as there is no excuse ‘why culture has to be a reason for ongoing inequality’ she powerfully argued.

These opening points reverberated across the following days, especially through Lord Howarth’s talk, titled Gaining Ground, which recounted many UK policy developments of recent years - with a nod to David Cameron’s introduction of ‘well-being’ as an indicator of governmental success over that of Gross Domestic Product. (Howarth hinted that Keir Starmer was once again in conversation with the happiness guru, Richard Laylard to develop further thinking along these lines.) As CHWA is an English body, it was left to Wales, Scotland and Ireland to represent different policy approaches to arts and well-being across an increasingly divided and unequal UK, one whose own internal ‘borders’ have been thrown into doubt.

Arts Council Wales’ chief (Phil George) gave an overview of the development of arts-health in Wales over the last five years, especially the novel Memorandum of Understanding struck between ACW and the Welsh NHS Confederation (supported by WAHWN’s own Angela Rogers and Prue Thimbleby of Swansea Health Board Arts.) George proposed Wales as being ‘ahead of the pack’ by way of the ‘world beating’ policy framework provided by the Future Generations Act. Northern Irish delegates, by contrast, identified unexpected gains from working in a ‘political vacuum’ in the 1990s that permits today. While Ireland’s panel asked ‘are we there yet’? with progress made through random ‘accidental logic’. They too had produced a mapping report, keen to see strategic links forged across their two-tier health service, still reeling from pandemic, (still ‘aspiring to universalism’)

Scotland’s panel gave a firmer focus to the pandemic’s impact, with a report on social and economic recovery published by the Scottish government asking, If not now, when?  (suggesting an opposite problem to the one set out earlier by Allotey, who had characterised a ‘tyranny of urgency’ prompted by pandemic). The question was left open as to whether responses to inequality lay in doing more of the same, or taking entirely different approaches. Representing Creative Scotland’s, Milica Milosevic dryly noted how ‘different narratives depend on who dominates the discourse.’

A different measure of progress was articulated by members of the Art and Global Health Centre for Africa. They described using the African concept of collectivism - ‘umuntu’ - to address barriers to healthcare experienced by LGBTQI+ people in Malawi. Rather than avoid conflict, disagreement over cultural values was ‘encouraged’ through open forums by way of creative play. ‘Giving room for contentious issues’ allowed non-judgemental forums for changes in attitudes to take place. Rich comparisons - between UK Nations, as well as between the Global North and South - prompted questions around what kinds of shared values might inform a conference whose exchanges could be differently and more equitably weighted.

Local and ‘indigenous’ culture was further discussed in relation to the need to ‘shed western concepts of well-being’ (Patricia Navas). Class division, though it runs deep in British culture, is also part of Indian Caste system it was noted, (Pradeep Narayanan) with forms of discriminatory etiquette ‘so much part of culture, no-one questions them’. The importance of agency was underlined, including the agency to ‘define culture and well-being on your own terms’ (Chao Tatiana Main), especially through first-person experience (Clive Parkinson’s prose poem-polemic blended both to powerful effect).

Evening sessions provided more informal forums for reflection. ‘Do we help sedate or activate?’ one panel asked. ’Both, in good faith!’ (Sarah Blowers). Art was the most appropriate place for the investment of ‘feelings and emotions’. We need to create ‘a society where we listen to each others pain and not be scared of that. That’s not not just an English thing,’ (Leah Thorn). CHWA’s Director also called for similar skills in a final session dedicated to future hopes, calling for ’collective emotional intelligence’ (Victoria Hume). In these quieter zones, ’a humble spirit’ was called for in order to understand the cultures we work across and within: ‘Not only those far away’ Patricia Navas insisted, but ‘even to understand our own!’ Yn wir felly! 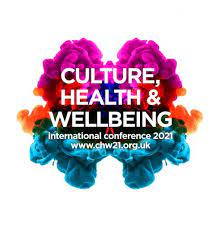