You are here: Knowledge Bank

Prosiect Tsuru Project is an 8 week experimental participatory arts project that began in January 2021, delivered by Tanio in partnership with Ysbyty'r Seren (CTMUHB), and kindly by funded by ACW and Tanio. In Japanese, 'tsuru' means 'crane' and is symbolic of hope and healing during hard times. This project explored innovative ways of engaging the health care staff of Ysbyty'r Seren field hospital in the creative arts to improve overall wellbeing and resilience. In total, over 100 individuals took part and the project went viral, with more than 400 cranes featured as a visual installation in March 2021, marking 1 year since the UK's first lockdown.

Healthcare workers suffered unprecedented levels of stress, anxiety, and burnout during the pandemic (e.g. as documented by Ferry, Wereski, Strachan & Mills; QJM: An International Journal of Medicine, Volume 114, Issue 6, June 2021, Pages 374–380). Based on discussions with a number of CTMUHB staff, the demand on their time and energy, and the evolving complexity of their environment meant that creative interventions for staff wellbeing and resilience were not always possible. Tsuru aimed to experiment with a 'hands off', flexible approach to increasing this engagement, giving participants 5 minutes of mindfulness through this creative task. We would then evaluate the value of this exploratory approach to inform future collaborations.

Developing an approach that was flexible and ignited curiosity was key to this project. Tanio set up a 'Tsuru Station' in the staff room with all materials and instructions needed for staff to complete an origami crane. This included a basket, waterproof origami paper, written instructions and a QR code to access a video tutorial. Participants were encouraged to leave their completed cranes in the basket for collection. However, communication was deliberately vague: participants were free to take materials home, leave them incomplete, or make as many as they wished. We theorized that this allowed for full anonymity, self-sufficiency, and flexibility, resulting in staff actively choosing to participate where and when was convenient e.g. during a night shift, a break, or at home with family. Materials were intermitently replenished and after a few weeks, take up was slow. To ecnourage participation a social media post was released by CTMUHB on Facebook. This led to a surge in participation across the entire healthboard and as such the project's location and focus became much wider than just Ysbyty'r Seren. This inlcuded staff, patients, volunteers and the public. In total, we summise 120 individuals took part from across South Wales submitting a total of 403 cranes.

As an aim of the project was to keep the intervention minimal, most of the monitoring and evaluation took place at the end. We primarily used qualitative data capture, as well as the number of cranes we received back as evidence of quantitative data and as artefacts from the project. In total, we received 22 cranes from Ysbyty'r Seren, and 381 from other areas of the healthboard. This included Tsuru Stations in Prince Charles Hospital and POW, as well as submissions from members of the public, patients, chaplains, medical illustrations, radiology, and volunteers. This was a lower number from Seren than hoped, however the disadvantage of this intervention method meant that we were unable to capture with certainty how many cranes were made in total and by whom (e.g. many more cranes may have been attempted and thrown away or kept by participants than were submitted). Despite this, of the 120 individuals known to have participated, we received positive anecdotal feedback: 'It seemed so incredibly relevant… I thoroughly enjoyed doing this'. 'It was a fun challenge, it was quite relaxing'. In total, the project cost £64.68 in materials, and a further £359.96 in other costs (e.g. translation and filming). This works out at less than £1 per crane submitted.

On reflection, we have learned that even a 'hands off' approach to participation can prove difficult engaging staff in healthcare settings. Due to this, we were not able to evaluate or monitor as accurately or thoroughly as we would have liked. However, it is clear the concept captured peoples' imagination and we were able to respond and adapt the project quickly based on demand. It was incredibly cost and time effective for the reach and impact it had as a creative intervention, and as such is easily replicable and scalable.

The installation was enjoyed for a week in March 2021, and the cranes were subsequently re-used by CTMUHB for an event later in the year. With refinement around monitoring, we will use this flexible approach again for future collaborations. Although we will never know the exact number of participants in 'Tsuru', we know that the project reached thousands via social media and can continue to do so with the online resources already made: adding more value, creating further impact and maintaining a legacy into the future. 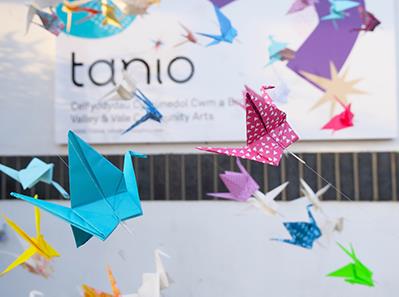